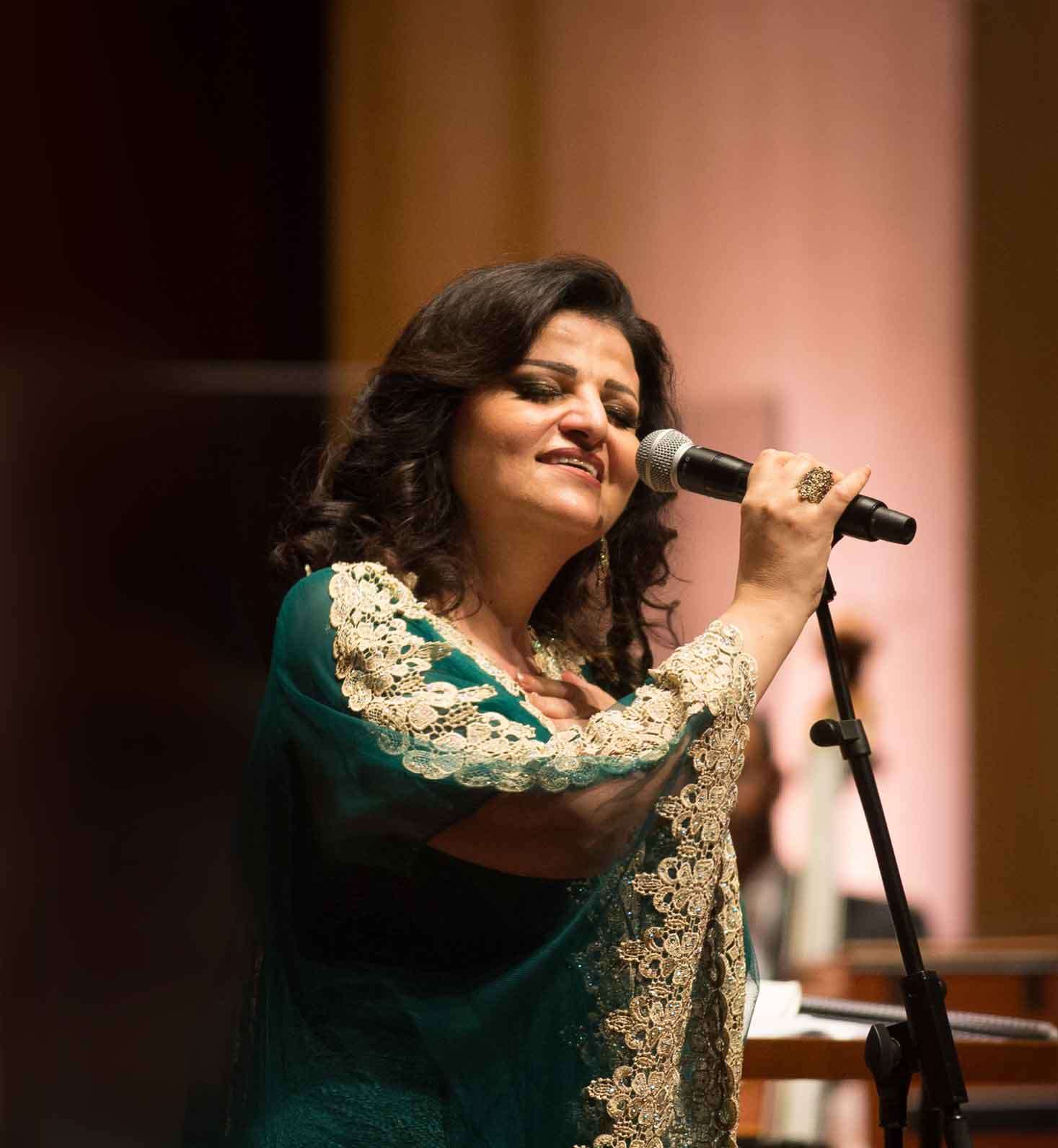 Named by the Arab and Western media ‘Priestess of the Stage’, ‘Poet of the song and its educator’, and ‘Diva of the Orient’, she is the ‘Fighter for Genuine Art’, as the Great Wadih Al Safi once called her.

Jahida Wehbe graduated from the Lebanese university, majoring in psychology. She also holds a degree in oriental singing from the Lebanese National Higher Conservatory of Music, where she studied oud (the lute), opera in Arabic, Syriac and Byzantine chant, as well as Qur’anic Tajweed. In addition, Jahida received a higher diploma in Acting and Direction from the Lebanese University, Institute of Fine Arts. She is a member of the Syndicate of Professional Artists in Lebanon and the French SACEM Society. She also held the position of Head of Culture and Programs Committee on the board of Lebanese Composers.

Jahida took major roles in many plays and movies in Lebanon and the Arab World, which obtained several awards in international festivals.

Touring the world singing about Eastern musical heritage, love, earth, mankind, and the values of rightness and beauty, she’s been creating a special style of songs that suit her unique identity and leaving her unique print on Arabic Oriental music with her one of a kind voice. She has also had the privilege to sing works of great poets and authors, like Al-Hallaj, Rabia Al-Adawiya, Gunter Grass, Gebran, Lorca, Ounsi Al-Hajj, Said Akl, Pablo Neruda, Mahmoud Darwish,  Abu Firas Al-Hamdani, Al Sayab, Lamia Amara, Ahlam Mosteghanemi , Talal Haidar, Tagore, Adonis, Al Mutanabi, Ibn Arabi, Al khayyam, Al-Roumi and others. Not to mention working with Disney Productions on dubbing and recording children musical shows.

Most notably, Jahida was selected in 2013 by Cambridge University in the UK, alongside 2000 outstanding intellectuals in this century, where her biography was included in the University’s renowned dictionary series. Jahida was also honored by the Arab Pioneers Festival sponsored by the Arab League as one of the pioneers in the field of art and culture in the Arab World. Most recently, she was recognized by the United Nations, ESCWA, as one of the most important singers in the Middle East, for her efforts to promote culture and authenticity through her work.

In addition, Jahida has produced soundtracks for several Lebanese films, participating in many plays and documentaries based on the biographies of Arab and international literary giants such as Gebran and Al Sayyab ...

On another note, Jahida performed a set of songs in Paris by the iconic singer Edith Piaf during her centennial celebrations, to great acclaim, and is about to take the project on tour around the world. She has also recorded two albums before the lockdown, between Prague, Belgium, France, and Lebanon, released this summer, that added to her six previously released albums, most famous of which are” Katabtany” and “Shahd”. Her album "Psalms" was considered a noble message against the obscurantism, racism and triumph of man's humanity to whatever religion he belonged.

Jahida performed at the launching ceremony of "Muharraq Capital of Islamic Culture in Bahrain, with the attendance of twenty Ministers of Culture from all over the world. She also had a very successful concert in Muscat, at the Royal Opera House, with the Omani Symphony Orchestra led by Maestro Andre Al-Hajj, who performed oriental music for the first time ever accompanying an oriental singer.

She also participated in two international projects, the first one took place in France / Rennes, where she sang (without a microphone) at the “A l'Unisson” concert with the British Symphony Orchestra, accompanied by more than 150 French chorale members led by Maestro Nader Abbassi. The second was "Opera Scheherazade" that was held in Tunisia, which was supported by Afac organization, where she successfully played the role of Scheherazade and performed live with the Mediterranean Symphony Orchestra, with both Sousse and Opera Nice chorales, led by Maestro Samir Farjani.

Following her successful concert in the Baalbeck International Festival in 2018, Jahida returned to the Temple of Bacchus on 2019 to give two successful concerts in this prestigious festival, performing the most delightful Andalusian melodies "From Muwashahat to Flamenco" with the renowned musician Omar Munir and his band.

The recipient of the Nobel prize, writer Günter Grass, once described her to have 'a remarkable ability to set poetry to music and to rewrite the poem with her voice and melody.'

Having been portrayed as “the miracle of all blessed voices” by the Algerian author Ahlam Mosteghanemi, Jahida has enriched the Arabic canon of music with many tunes and was able to revive the status of lyrical poems in an age of demagogism.